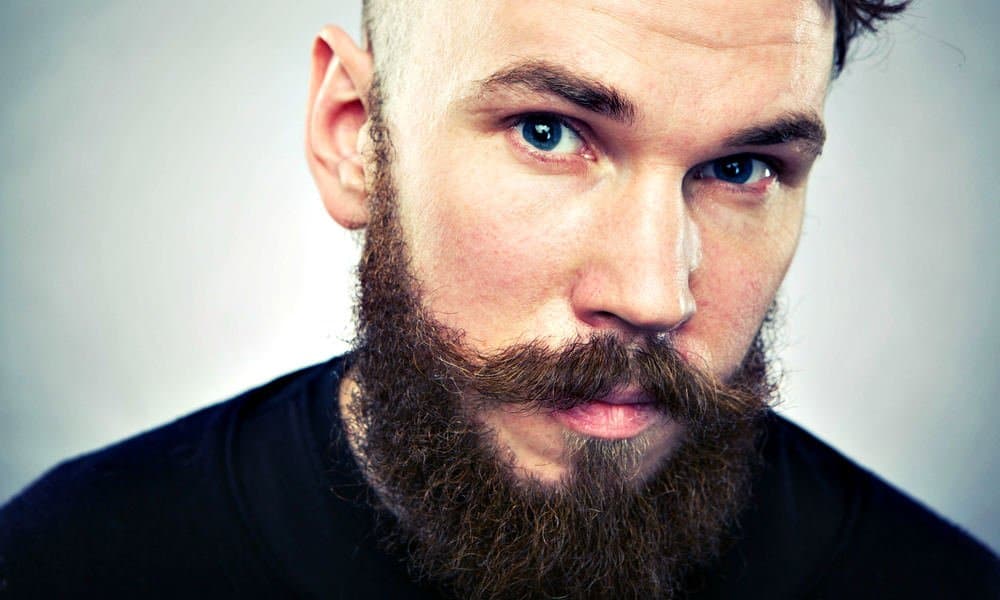 Beard oil – as Wikipedia explains – is a “cosmetic product that is used to nourish the skin under the beard”. Some other benefits of beard oil include its ability to reduce beard itch and warding off beardruff.

Some also say that beard oil is used primarily to replenish the natural sebum oils you lose when you wash your face or take a shower (the harsh detergents in most shampoos strip away these precious oils).

“What exactly is beard oil and is it truly as necessary as everyone makes it out to be?”

We are going to dig deep on those questions today, looking at the ingredients within a beard oil dropper-bottle, and whether is it truly worth using any. ↓

What is Inside a Beard Oil Dropper 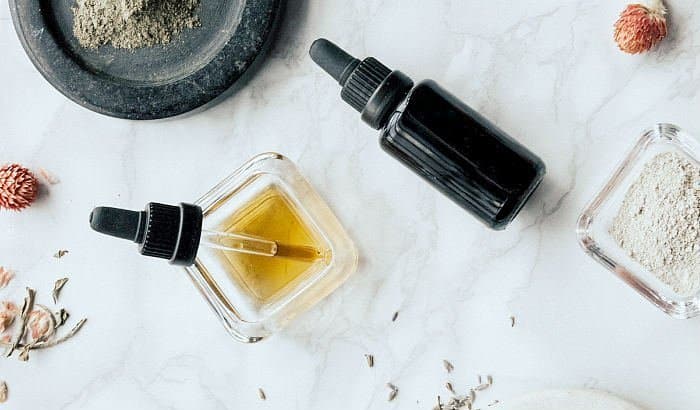 The basic formulation of beard oil is very simple.

You have a carrier oil base, which is a blend of one or more oils such as jojoba oil, argan oil, sunflower seed oil, coconut oil, almond oil, grapeseed oil, etc.

The function of the carrier oils is specifically to moisturize the skin and the hair follicle, while some oils – such as coconut oil and jojoba oil – are actually able to penetrate deep within the facial hair fibers and nourish them from inside.

Then you have the essential oils which can be seen as the secondary ingredient (and typically not used at all in unscented beard oils).

Most of the time they are used solely for scent purposes as in oils like patchouli, sandalwood, cedarwood, lavender, etc. some brands (sadly) choose to use synthetic fragrance.

Rarely, the essential oils can also be used for other purposes, such as for their antibacterial benefits (oils like tea tree oil, peppermint oil, and lemongrass oil for example).

Even rarer is the use of fat-soluble vitamins as beard oil ingredients. Vitamin E oil is the most common of these, and some times you can find vitamins A, D, or even K2 in the ingredient list.

Bottom line: Beard oil consists of the carrier oil base and some essential oils that are primarily used for scent purposes.

Do You Really Need Beard Oil? 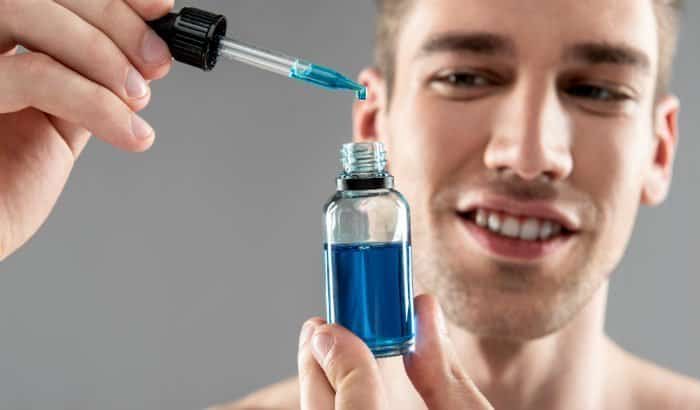 “Is beard oil really even worth using?”

The simple answer is…

Beards have been grown from ever since the dawn of men, yet beard oil is a relatively new invention.

You can absolutely 100% certainly grow a beard without ever having to buy a bottle of beard oil, and up to a certain length of facial hair, your natural sebum oil production will be plenty enough to moisturize the whiskers.

However, the modern man is constantly washing his face and taking showers far more often than our predecessors did.

Because of this, our skin underneath the facial hair dries up faster as the harsh detergents in shampoos (even special beard shampoos to some extent) strip away the natural sebum oils that would otherwise provide moisture to the beard.

So should a modern man use beard oil?

Yes, but not necessarily the premade stuff. Moisturizing the beard is important and has a myriad of benefits, but most men don’t realize that you can do that without ever having to buy beard oil.

You see, premade beard oils are astronomically expensive. It’s currently the most expensive men’s grooming product you can get your hands on.

On average, a bottle of beard oil will cost around $25, with some brands charging upwards of fifty-dollars for a measly 1 oz (30ml) bottle.

Buying a blend of cheap carrier oils and essential oils labeled as “beard oil” for $25-50 is definitely not worth it, especially if you’re growing out a long beard that soaks up multiple drops of beard oil per day.

The margins within the beard product industry are often more than 10x, which – even though I love capitalism – is pretty insane. 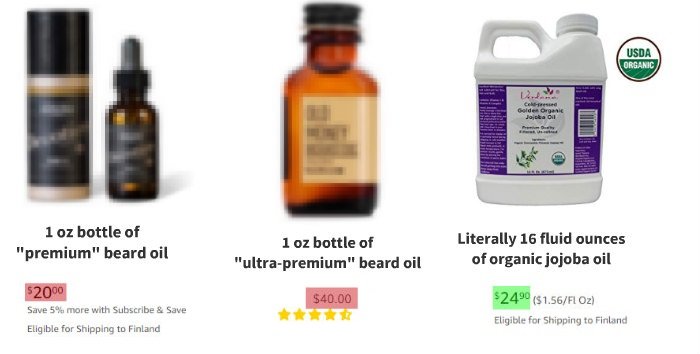 Smart beardsmen have been making their own DIY beard oil formulations for years, or have used some cheap beard oil substitutes like just pure jojoba oil or coconut oil on their beards.

Just for the fun of it, if we compare the costs of homemade beard oils to the premade beard oils, we can see how much of a bad investment a bottle of beard oil can really be…

If you want to see the difference between premade beard oils and homemade stuff in a graph, here’s what it will look like… 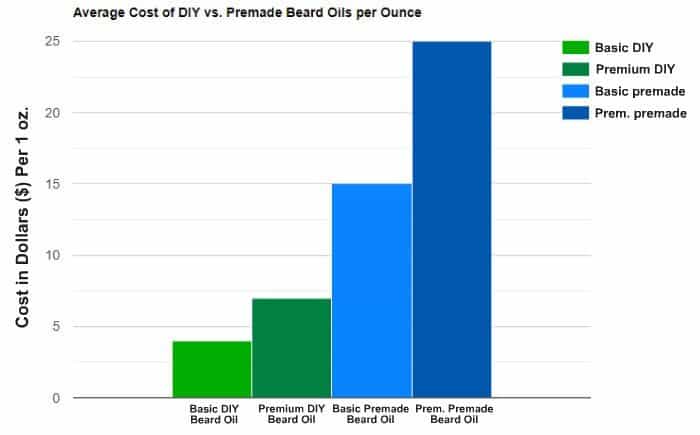 Even the dumbest bearded men should realize by now that money-wise, beard oil is a horrible investment (unless you’re the one selling it).

Does this mean you shouldn’t ever use premade beard oils?

No. You can definitely use them and some of them are really great for moisturizing the mane, it’s just not worth it in the long run if you think about the actual monetary value.

Bottom line: Premade beard oils are rarely worth their price. Making your own is stupidly easy and costs roughly 10x less. Alternatively, you could just use a beard oil substitute like baby oil or pure jojoba oil which tends to work just as well as a bottle of premade beard oil does.

BONUS: Below is a simple beard oil recipe that you can easily make yourself and save tons of money over the years…

Beard oil is a simple blend of carrier oils that moisturize and nourish the skin under your beard and the actual facial hair follicles, making your beard feel softer and look more vibrant.

It’s typically scented with essential oils and in rare cases with synthetic fragrance.

Buying premade beard oil is rarely worth it since it has become the most expensive men’s grooming product you could get, while the production costs are one of the lowest…

Purely from a value perspective, it’s just not worth using beard oil, but rather you should be making it yourself at home from bulk carrier oils and essential oils, or use some of the cheaper alternatives like just pure jojoba oil for example.

There are some older hardcore beardsmen who have grown their beards for tens of years and never used any beard oil (why would they? The hype wasn’t around when they began their journeys).

If you’d ask any of them, I’m sure they would be glad to tell you that the claims about the necessity of beard oils and other beard products like balms and shampoos are mostly marketing talk. 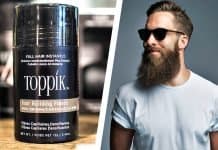 Can You Use Toppik Hair Building Fibers on the Beard?